A Review of the Role of Statins in Heart Failure Treatment


Background: Heart failure is a common medical problem in the world, which has a high prevalence in both developed and developing countries. Today, among the medications used for the heart failure treatment, there are many medications with a positive cardiac contraction effect (positive inotropic such as digital glycosides, adrenergic receptor stimulants, and phosphodiesterase inhibitors), a large number of cardiac diluents (such as Angiotensin-Converting Enzyme (ACE) inhibitor group), and a few other types of drugs whose final effects are still under review. Statins are valuable drugs that are broadly prescribed in hyperlipidemia and cardiovascular patients due to their multiple properties, such as cholesterol reduction, endothelial function improvement, antioxidative, anti-inflammatory, neovascularization, and immunomodulatory activities.

Methods: There is evidence that the therapeutic role of statins in HF, due to myocardial hypertrophy, show reduction in cardiomyocyte loss in the apoptosis process, oxidative stress, inflammation, and also the return of neurohormonal imbalance. However, the fact that these drugs have no sideeffects has not been confirmed in all studies, as statins prevent the production of particular beneficial and protective factors, such as coenzyme Q10 (CoQ10), while inhibiting the production of specific proteins involved in pathologic mechanisms.

Results: Recently, it has been hypothesized that, despite the positive effects reported, high doses of statins in patients with long-term heart failure lead to progress in heart failure by inhibiting CoQ10 synthesis and intensifying hypertrophy.

Conclusion: Thus, it can be stated that the advantage of using statins depends on factors, such as stroke fraction, and the existence of other standard indications such as atherosclerotic diseases or high Low-Density Lipoprotein-C (LDL-C). 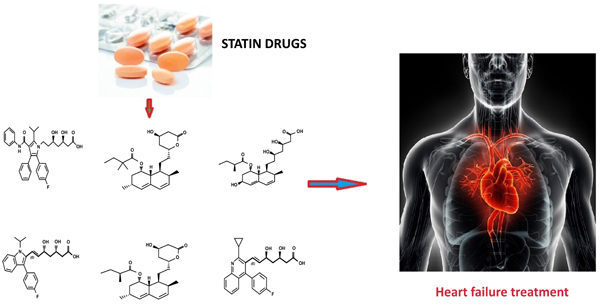